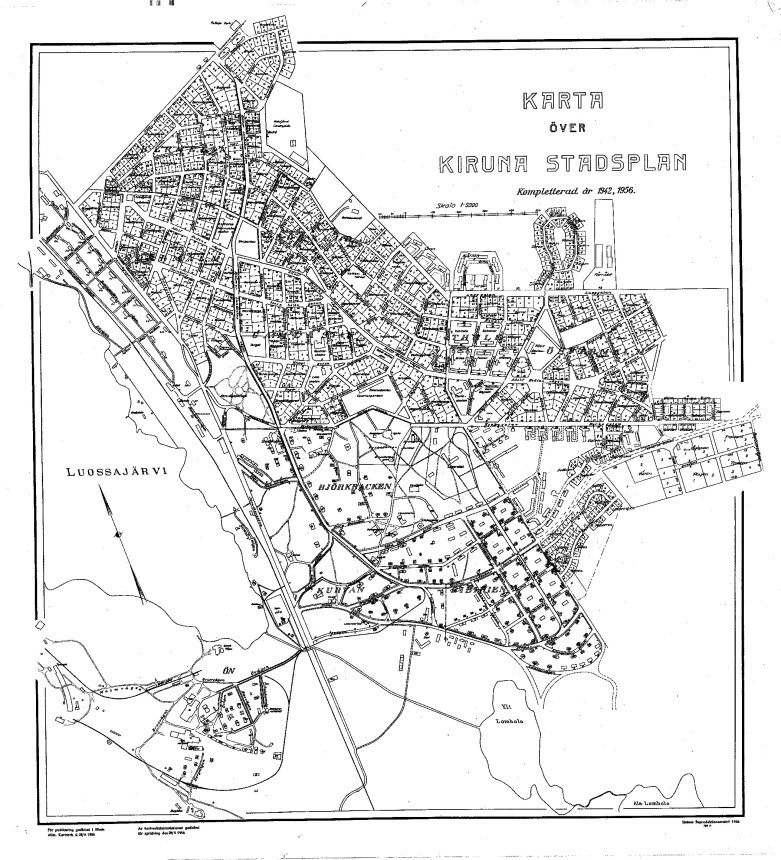 LKAB's first managing director Hjalmar Lundbohm is acknowledged as the founder of the town. Lundbohm was a geologist with a keen interest in the arts, and he wanted to make Kiruna a model community.

In order to avoid the mistakes made in Malmberget, where among other things a chaotic shanty town grew up, the founder of Kiruna decided to enlist the help of Sweden's foremost experts in architecture and community planning. One of them was town planner Per-Olov Hallman, who gave Kiruna the country's first climate-adapted community plan.

The streets follow the contours of the terrain in an irregular pattern, so that the cold winds are slowed, and several housing areas, such as Bolaget and the SJ housing area, still bear witness to the foresight shown at the time. When the people of Kiruna now, over a century later, have to move parts of their town, the intention is to utilise the creative thought of the old community plan, and in combination with modern knowledge to build a new model community.

In many ways, Kiruna got off to a better start than many other communities. One example is the best vocational training in Sweden, KPU (Kiruna practical school for young people) was started on the initiative of Hjalmar Lundbohm in 1909. The four-year training courses offered at KPU were renowned for producing highly skilled tradesmen. Sweden had never seen anything like this, and the result was such that a few years later, the Kiruna Model was used as the blueprint for the entire Swedish vocational school system.

Another example is research. Way back in 1902, the Scientific Society bought the engineer's dwelling in Katterjåkk. There, research began, the subjects being among others geology, climate and the Aurora. This initiative also led to Abisko Scientific Research Station, whose research operations are still at the scientific forefront. Climate change is a burning topical issue, and the consequences are seen most clearly in northern areas.

Abisko Scientific Research Station has become an important factor in this research. The early initiative in Katterjåkk can also be seen as sowing the seed of what was to become space research in Kiruna. In July 1957, Kiruna geophysical observatory was inaugurated. Under the leadership of the visionary Bengt Hultqvist, who may be seen as the Hjalmar Lundbohm of space research, space operations have grown and today employ around 500 people, and Kiruna today is a recognised centre for space research in Northern Europe.

Another example of the visionary thinking was the construction of the world's northernmost tramway. The creation of Kiruna was a gigantic social experiment, carried out in accordance with Lundbohm's intentions. This social experiment attracted the interest of social scientists both in Sweden and abroad, at the same time as it attracted many artists to the northernmost parts of Lapland.

Many of them left behind some of their works, and consequently Kiruna Municipality now owns an excellent collection of turn-of-the-century art, a collection to which other works have been added over the years, and which now comprises over 2,000 works.