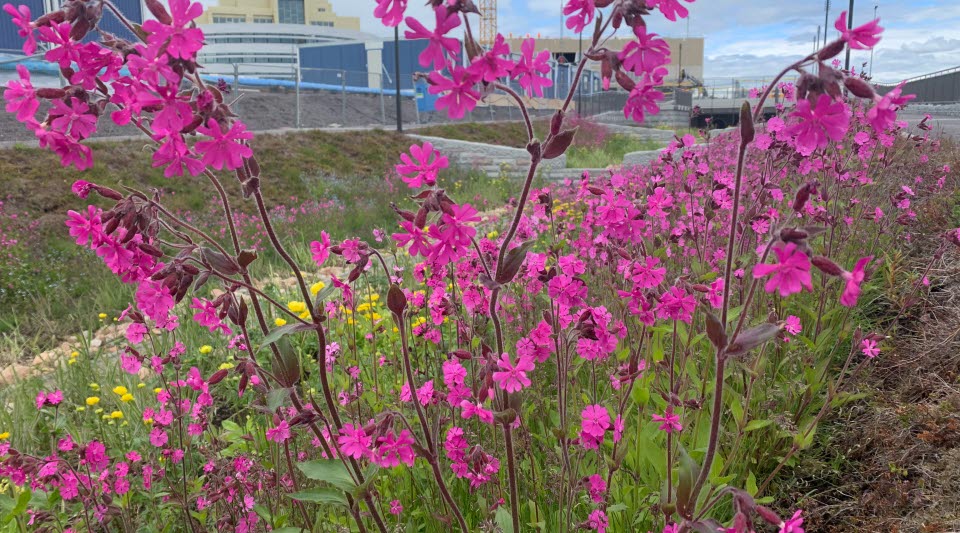 A stormwater runoff park in an Arctic environment with plants that thrive in this climate. The vegetation in the park has been inspired by different environments in the mountain region: the mountains, the water and the mire. The mountains are represented by low bushes that have been brought here from the local area. The water is represented by white, purple and pink plants and a mixture of wild varieties of cultivated plants blended with many species of grass. The plants have been chosen to resemble the vegetation that grows along the shoreline of brooks and rivers. The mire are represented by yellow and orange plants which resemble the colours of autumn and the mire. The plants have been chosen to look like the vegetation that grows in favourable locations in mires and bogs.Other tall and stately plants which can be seen are old cultivated species brought to Kiruna by the people who chose to settle here. The function of the stormwater runoff system is to delay the flow of stormwater to the Luossajoki creek. This reduces the risk of flooding in the event of a cloudburst and heavy rain. When there is heavy precipitation, the spaces between the granite walls fill up and at maximum capacity, the entire facility is filled with water. The stormwater runoff system also purifies the water. Rain water and meltwater from, for example, streets, roads and car parks, runs off into stormwater wells that have been installed all over the new part of Kiruna. After that, the water is purified through a number of stages, for instance, by the plants which take up the polluted water. The water is also purified through sedimentation and oxidation or by being broken down by the UV light of the sun.